You may wonder why Scotland has so many wonderful castles. Maybe we just liked building them, or maybe they were built to defend our land, or maybe to show off power and wealth.Whatever the reason, everywhere you go in Scotland there will be a castle not too far away. Sometimes ruined, sometimes still lived in, big or small, whether it's called a Keep, a Tower, a Palace or a Castle, Scotland has plenty to choose from....here are just a few of our favourites. 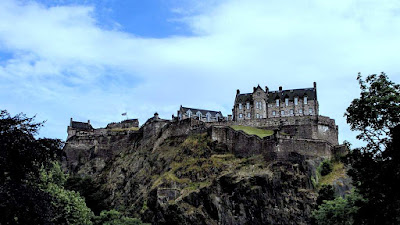 Edinburgh Castle - Picture by Arden Country House in Linlithgow - Edinburgh Castle is probably the most well-known castle, sitting on the top of a volcanic plug above the city and open to the public every day except Christmas Day, Boxing Day and New Year. Edinburgh Castle houses the Scottish Crown Jewels and has three wonderful military Museums within its powerful stone walls. The esplanade in front of Edinburgh Castle is the venue for the Edinburgh Military Tattoo every year during August at the time of the Edinburgh Festival. Click here for our website and more castles in Edinburgh and The Lothians 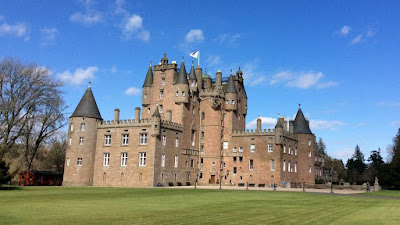 Glamis Castle - Picture by Castleview B&B in Dufftown - Glamis Castle is the family home of Queen Elizabeth, the Queen Mother and the birthplace of Princess Margaret. Glamis Castle has been the home of the Lyon family since the 14th century and is the seat of the Earls of Strathmore and Kinghorne. Glamis is also famous for being the setting of Shakespeare's play Macbeth. The history and royal connections make Glamis a fascinating place to visit. Glamis Castle is located near Forfar in Angus. Click here for our website and more castles in Angus and Dundee 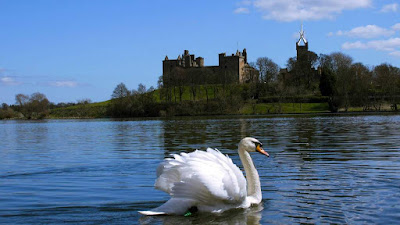 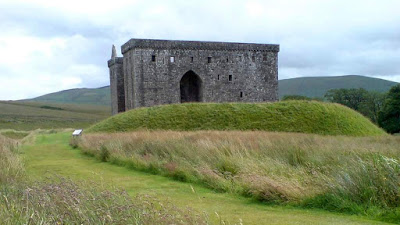 Threave Castle - Picture by The Waterside Rooms in Dornock - Threave Castle near Castle Douglas in Dumfries and Galloway is located on an island in the River Dee. Threave was the home of the Black Douglas who were Earls of Douglas from the late 1300s till 1455. Threave Castle is a traditional rectangular Keep which was annexed by the Crown in the 15th Century. Famous for the wonderful gardens attached to it. Threave is a must see destination in for any visitor to the Dumfries area. Click here for our website and more castles in Dumfries and Galloway 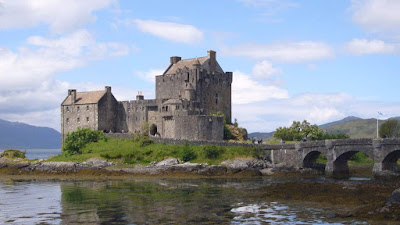 Eilean Donan Castle - Picture by The Heathers in Glenmoriston - Eilean Donan Castle is on the road to the Isle of Skye, Eilean Donan is regularly photographed and filmed for its romantic setting with the little hump backed bridge leading to the Castle. Built in the 13th century as a stronghold for the Clan Mackenzie and their allies the Clan Macrae, the castle was destroyed following their support for the Jacobite uprising. Situated on a small island where three lochs meet, Eilean Donan Castle is very picturesque and has been reconstructed during the 20thCentury. A very popular venue for weddings Eilean Donan Castle is open to visitors every day except Christmas Day and the whole of January. Click here for our website and more castles in The Highlands 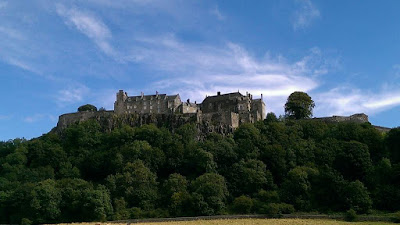 Stirling Castle - Picture by Garvally House in Alloa - Stirling Castle was strategically very important, guarding the furthest downstream crossing of the River Forth and the gateway to the Highlands. One of the largest of Scotland's Castles, Stirling was important from the 13th century to the 16th century and even beyond. Some buildings within the walls date back to the 14thCentury. Recent renovations have included the total refurbishment of the Royal Apartments, and the hanging of the 7 replica tapestries of the Hunting of the Unicorn. Click here for our website and more castles in Argyll, The Isles, Loch Lomond, Stirling and The Forth Valley 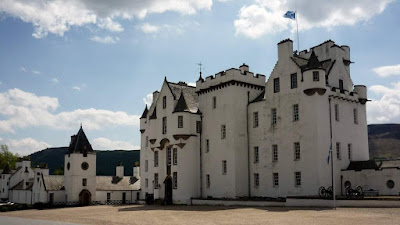 Blair Castle - Blair Castle in Perthshire has for many centuries been the chief stronghold of the Earls and Dukes of Atholl. With history dating back to the 1200s there's plenty to see at Blair with 32 rooms of the Castle open to the public presenting a picture of Scottish life from the 16thcentury onwards. Blair Castle is the venue for horse trials during the summer months. Open from May till the beginning of October. Click here for our website and more castles in Perthshire 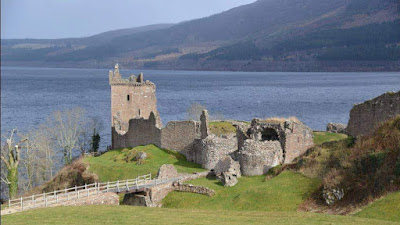 Urquhart Castle - Picture by Home Farm B&B in Muir of Ord - The ruins of Urquhart Castle are on a promontory overlooking Loch Ness. A fabulous location for the dramatic history that has taken place within its walls. The present ruins date from the 13th to the 16thcentury though the site has been occupied since the early medieval period. Granted to the Clan Grant in 1509 a continuing conflict with the Clan MacDonald meant the Castle was continually attacked and strengthened. It was finally abandoned in the 17th century. Click here for our website and more castles in The Highlands 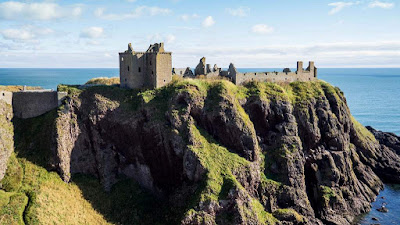 Dunnotar Castle - Picture by Duntrune House in Dundee - One of the most dramatic sites for a Scottish Castle must be Dunnottar Castle. The ruined medieval fortress is perched on a rocky headland on the north east coast of Scotland. Dunnottar Castle played a significant role during the Jacobite Uprising s in the 18th century and is the place where the Scottish Crown Jewels were hidden from Oliver Cromwell's invading army. Dunnottar Castle was the property of the Clan Keith from the 14thcentury. Click here for our website and more castles in Aberdeen, Grampian and Moray 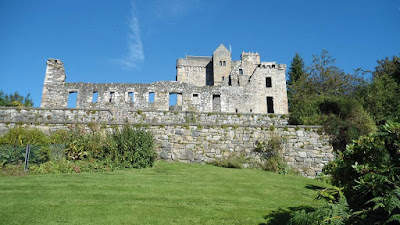 Castle Campbell - Picture by Garvally House in Alloa - Castle Campbell sits above the village of Dollar in Clackmannanshire. Built to guard the drovers road across the Ochil Hills into Perthshire, its location offers stunning views to the south. Castle Campbell was one of many castles owned by the Clan Campbell and the Dukes of Argyll and it was their lowland stronghold. Originally called Castle Gloom with the two hill streams running either side of it called Sorrow and Care. The site was easily defended and there was an early motte on the site from the 12th century. Click here for our website and more castles in Argyll, The Isles, Loch Lomond, Stirling and The Forth Valley 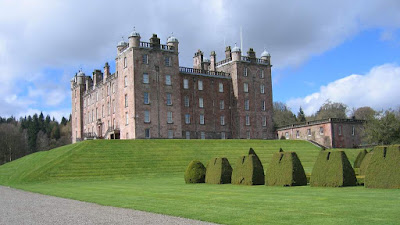 Drumlanrig Castle - Picture by Torbeckhill in Lockerbie - Drumlanrig Castle is owned by the Duke of Buccleuch and Queensferry and is located on the Queensferry estate which is in the northern part of Dumfries and Galloway. Drumlanrig is a magnificent building built in the late 17th century and nicknamed the Pink Palace as it was built of red sandstone. Unlike so many of Scotland's castles Drumlanrig is not a defensive building, though it is built on the site of what was once an ancient Stronghold of the Douglas family. It is built in the renaissance style. Drumlanrig houses the Buccleuch art collection which include a Da Vinci and Van Dykes, some of which were stolen in 2003 and were luckily found and returned in 2007. Click here for our website and more castles in Dumfries and Galloway 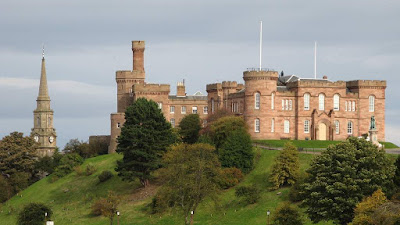 Inverness Castle - Picture by Home Farm B&B in Muir of Ord - Inverness Castle like both Stirling and Edinburgh is built on a rock and overlooks the city below. However, the present building is quite modern, built in 1836 on the site of an earlier 11th century building. It is used today to house Inverness Sheriff Court and is not open to the public. Click here for our website and more castles in The Highlands