Photo by The Waterside Rooms

While Perthshire has a wide variety and choice of historic attractions – castles, monuments and buildings, we’ve chosen some of the less well-known to give you a taster of what is on offer. From a tree of international renown to a simple medieval church tucked away from the public highway, from dwellings on water to cages to protect the dead – just a few of the historical sites for you to discover when you visit this beautiful part of Scotland.

There has been a church standing on the north bank of the River Tay in the village of Dunkeld since the sixth or early seventh century when the first Celtic monks set up their base in Alba. Once the religious centre of Scotland, the present Cathedral shows both Gothic and Norman influence having being completed over a period of nearly 250 years between 1260 and 1501. The Cathedral has twice suffered damage during Scotland's turbulent history – once in the Reformation and again in the Jacobite rebellion. Today the Cathedral is a beautiful, tranquil place of worship and houses a permanent local history exhibition telling the history of the town and the redevelopment of the reformed church.

This is a replica of an iron age loch dwelling constructed by the Scottish Trust for Underwater Archaeology in the beautiful setting of Highland Perthshire. Built on Loch Tay at Kenmore, the crannog is an authentic copy of a defensive homestead similar to those inhabited by our ancestors nearly 2,500 years ago. Available to visitors is a guided tour by knowledgeable ‘Iron Age’ guides and the opportunity to get ‘hand-on’ experience of ancient crafts using iron age technology. Special events are a regular feature during the season and weather depending, visitors can also hire replica dugout canoes.

Fortingall is a beautiful village close to Aberfeldy, a little north of the River Lyon. Famous for the Fortingall Yew, believed to be 5,000 years old and possibly the oldest living thing on earth, the village is also reputed to be the birth place of Pontius Pilate. All but wiped out by the Black Death in the Middle Ages, the AsCarn na Marbh or "Cairn of the Dead" standing stone is believed to mark the villagers grave. In the 19th century, Sir Donald Currie, a Glasgow shipping merchant, purchased the Glenlyon Estate and engaged Art and Craft architects to rebuild the village and that is what you see today. Cottages with their white painted exteriors and beautiful reed-thatched roofs, the traditional Fortingall Hotel with hints of the traditional design of Scottish tower houses and castles of the past, Molteno Village Hall and the post reformation Fortingall Church all contribute to the unique character that makes Fortingall so special.

Halfway between Perth and Gleneagles, the village of Dunning is home to two historic sites in one. The church is the site where the 6th century St. Serf supposedly slew the local dragon and dates originally from the 10th century with its clock tower and ancient stone carving. Its Romanesque architecture is striking and to be found along with other interesting structural changes that were made over the years to reflect the times of its use as the original Dunning parish church. Inside the church is housed the impressive ancient Dupplin Cross carved around 800 AD with inscriptions linking it to King Constantine. The cross came from nearby Forteviot close to the palace of the Pictish kings. Managed by Historic Scotland. There is a knowledgeable guide on-site to give visitors a fascinating personal guided tour of the church and the Dupplin Cross each day between Easter and the end of October.

St Mary’s Grandtully is a hidden gem in the Highland Perthshire crown set between Aberfeldy and Pitlochry. An exquisite example of a pre-Reformation Highland church, externally it is simple and rectangular, while internally it is almost devoid of ornamentation. What makes it extraordinary is its painted ceiling. One of only two church ceilings of the 1600s now remaining in its original setting (the other is in Largs), the decoration takes the form of 28 roundels of varying shapes and sizes depicting saints, proverbs and the local nobility’s heraldic achievements. The background is composed of clusters of fruit and flowers, birds and reclining angels trumpeting the Resurrection. The centre panel depicts the Resurrection itself, with a dying figure in a canopied bed about to be ‘stung’ by Death – a skeletal figure wielding a spear or arrow. To the right of the bed, the dead rise from their graves at the summons of a pair of angels sounding the last trumpet.

The Dunfallandy Stone, known locally as Clach an t'Sagairt or "The Priest's Stone”, is a Pictish cross slab which stands about a mile south of Pitlochry. Standing approx. 1.5m high and 0.6m wide, it dates back to the 8th century. The carvings are a highly elaborate cross carved on the front face and a collection of symbols and figures carved on the rear face. The spaces above and below the side arms of the cross are filled by a series of panels with carvings of animals and angels. The back face shows a collection of symbols seen on many Pictish stones such as the fish-tailed snakes that frame the stone but usually there are also three figures carved on this side of the stone. The top two are seated opposite each other on ornate chairs while between them is a cross on a table. Some believe this carving represents the meeting of St. Paul and St. Anthony, but it may equally be a scene from the life of the person the stone may have been carved to commemorate: perhaps his conversion to Christianity. Underneath the seated figures is a large carving of a horseman, again accompanied by symbols. The stone is now encased in glass and protected by Historic Scotland.

Situated between Pitlochry and Aberfeldy. While the present Logierait Kirk building only dates back to 1904, it is believed to stand on the site of an early Christian church founded by St. Cedd around 650 AD. The Kirkyard contains a number of decorated memorial stones including a Pictish Cross in the form of a sculpted stone. On one face is a knot work-decorated Cross with 4 small circular raised bosses and on the other what looks to be a horseman trampling a serpent-and-rod. The carvings show the horseman carrying a spear and riding a horse wearing an ornamented saddle and bridle. Also within the Kirkyard are 3 Mort Safes (2 adults and 1 child). A ‘Mort Safe’ was a heavy cast iron coffin cover rented out to families in the early 19th to prevent body snatchers from removing their newly buried relatives body to sell in Edinburgh for medical examination. The heavy iron frame was buried with the coffin, and then removed when the body had decomposed enough to be of no value. 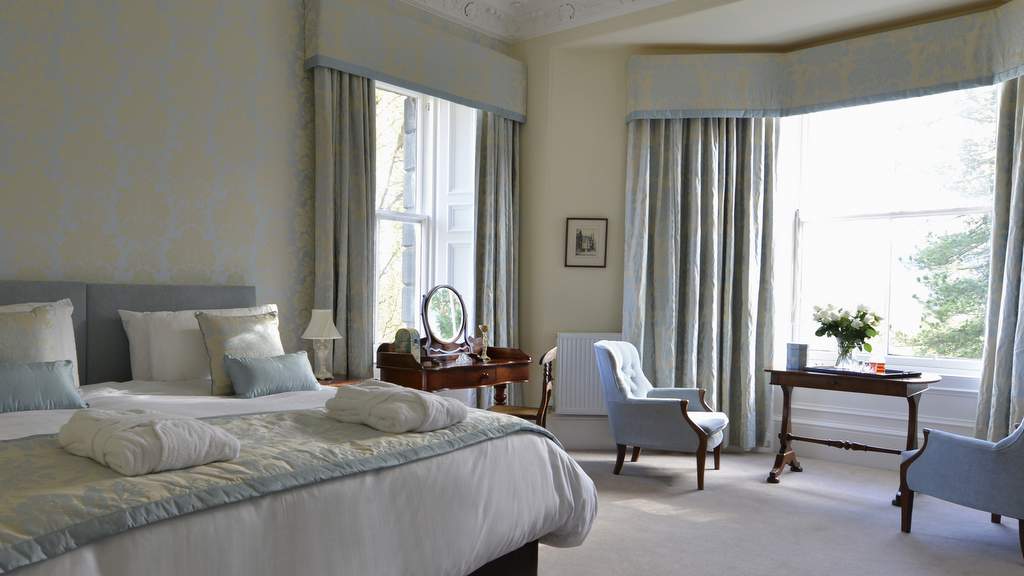 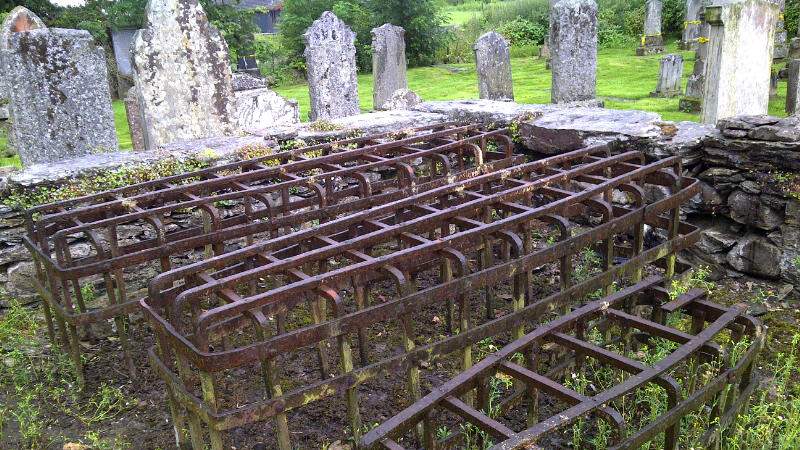 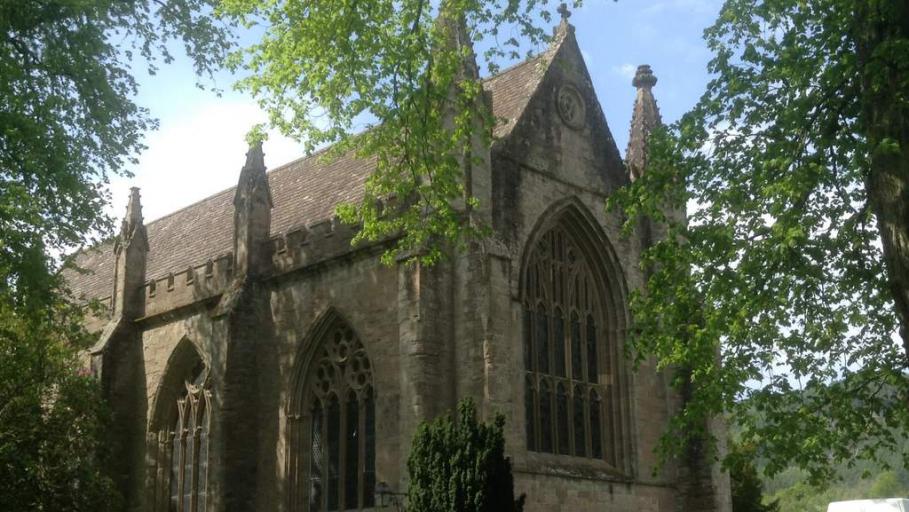 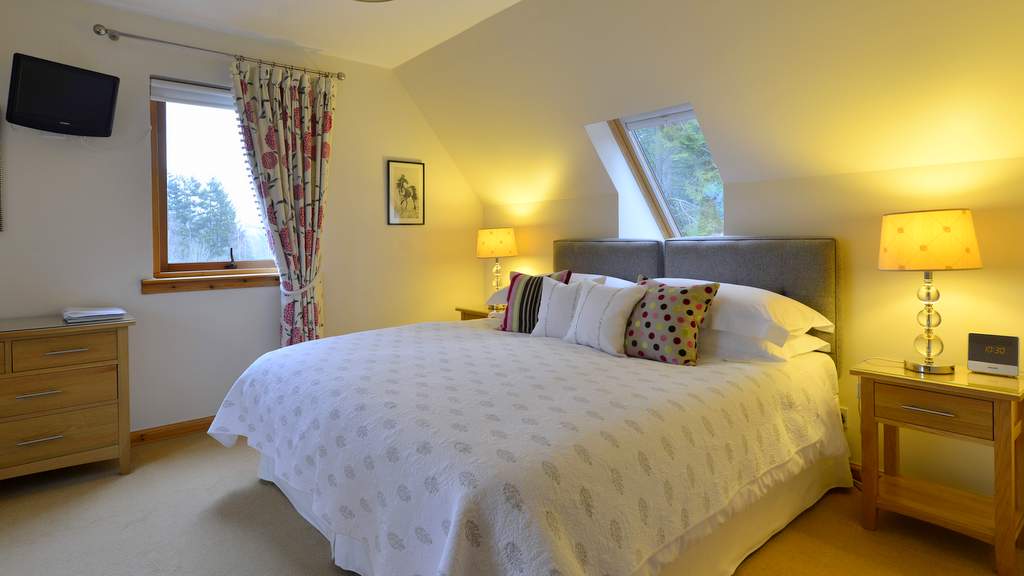 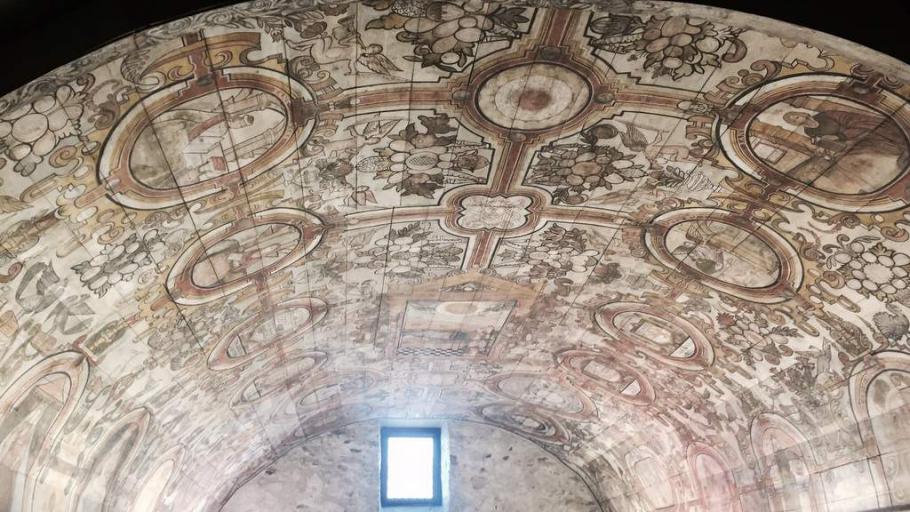