This week's blog is written by Lynne Read at The Auld Post Office in Spittal near Thurso.

Have you ever heard about a secret location and it becomes an obsession?  You’re not alone.

My eldest daughter Nicola, shared an article about a poem by Pablo Neruda, carved into a sandstone reef at a SECRET location in Caithness!

Nicola and I have been hiking since she was three, so for more than four decades we’ve picnicked and trekked many a landscape, shared magical skies, breath-taking seascapes and wondered at the flora and fauna of our beautiful country.  But nothing has held us so steadfast, on a mission to find the secret location of this poem.

Researching the internet gave little away.  A Facebook message brought a clue to the Bay of Sannick.

And, so our first trek, walking boots and wellies adorned, we set off from John O’Groats, past the caravan park and over the sand dunes to the pebbled beach, the sea was calm, sunny skies, our walk continued towards Duncansby Head, although little sign of sandstone reef.  A farmer in the distance tended his sheep and Nicola ventured up to ask the location of Bay of Sannick.  The farmer glanced out to sea and said ‘Further up and under water’! Nicola added a post on Facebook and her friend advised to park near Duncansby Head, follow the signposted footpath to the Bay of Sannick?  Signpost?  We’ve lived here more than 20 years and never noticed a signpost to Bay of Sannick! 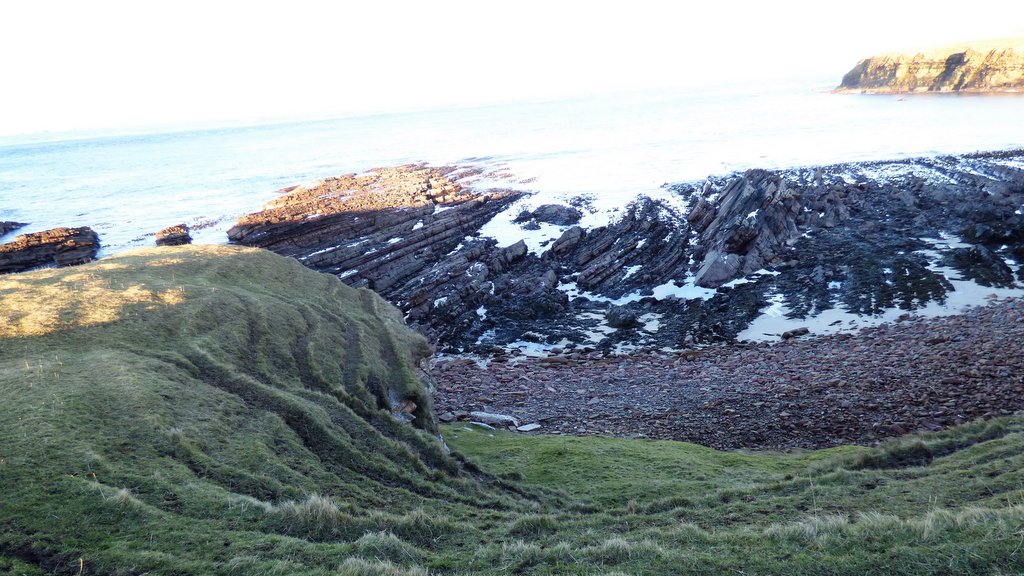 Checking the tide times, we set off on Mission II, the tide would be low for about an hour or so.  We trekked across the moorland, where the wind had blown the side of a caravan, named ‘Hurricane 1000’ and had laid to rest on the high cliff top.   Befitting name for our windy landscape, caravaners be warned!  Our walk continued down the sand dunes to the deserted bay, with views to Orkney Islands and the lighthouse at Duncansby Head. 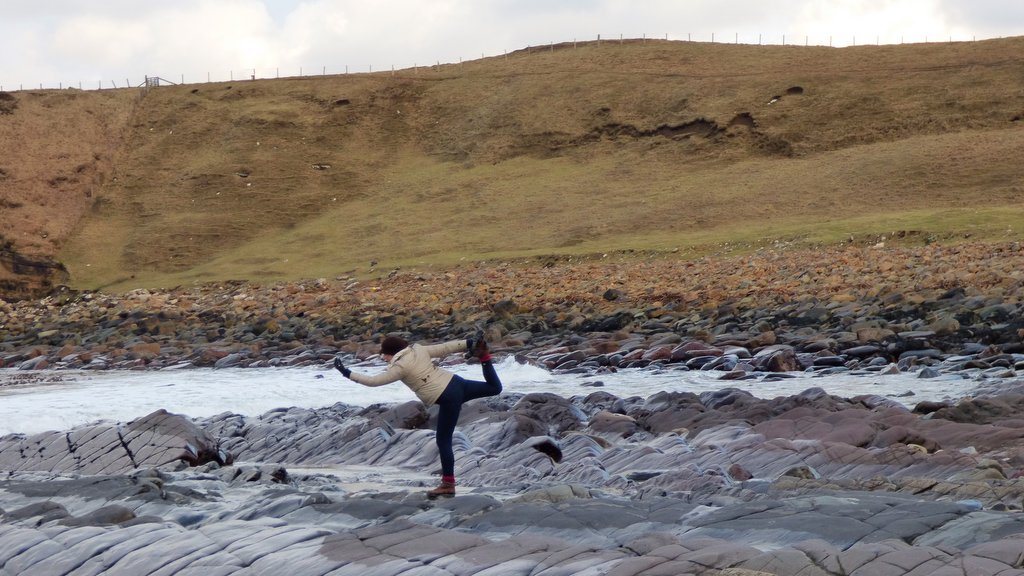 Climbing over rocks, Nicola couldn’t resist a yoga pose on the beach looking out to sea!   Mounds of slippery seaweed, more rock to climb, as we searched along row upon row of sandstone reef, with no sign of the poem.  The tide came in and the moment of discovery passed.

Back to Social media…what did we do in the olden days? 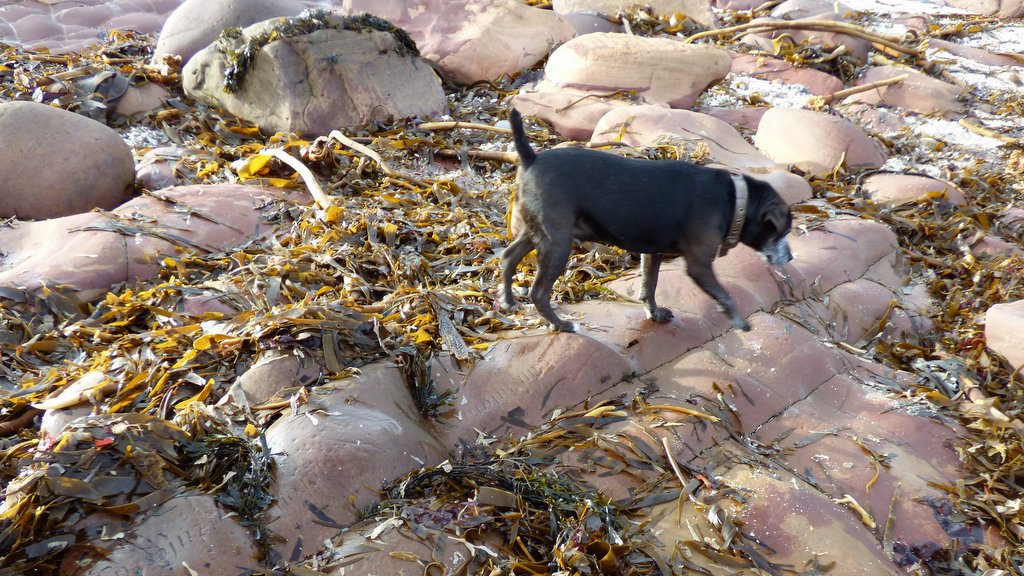 Nicola’s friend had come upon the words set in stone while walking his dog, and offered to guide us. Mission III, weather and tides checked, we set off on our 30 mile drive.    Now a party of four and Bisto the dog meet at the first Bay of Sannick. 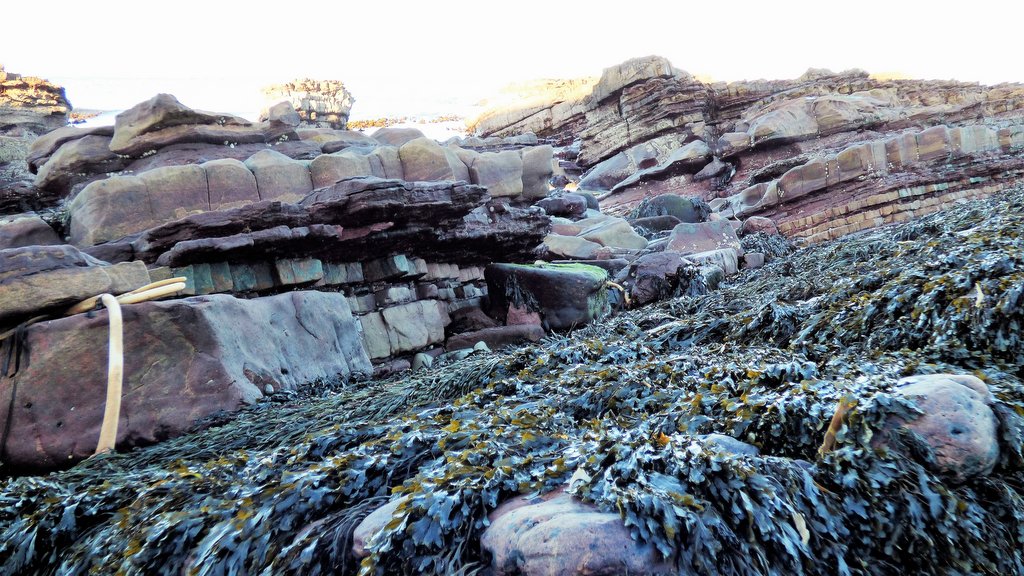 There’s 3 distinct bays when you’re on foot!  Climbing over the rocks to the 2nd bay, sliding over mounds of seaweed and slippery rock, clad in barnacles.  All of us slipped at some point.  Wet gloves!  Only Bisto had steady footing. 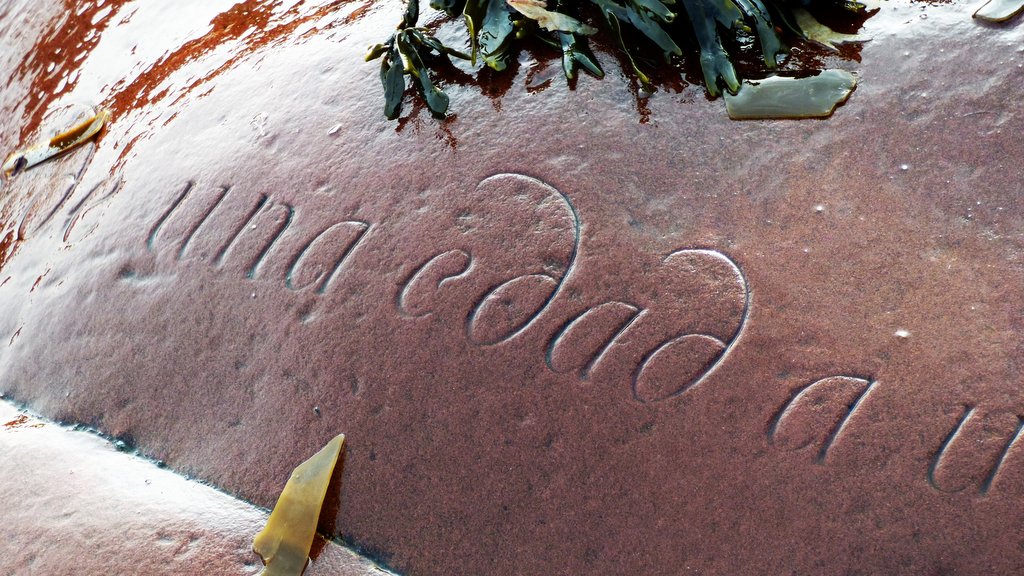 Reaching the 3rd bay, the red sand-stone reef stretches out as far as the eye can see, with the sea lapping up to the highest rocks. Unsure of the exact location, we all scoured the stone, slipping and sliding, helping each other to climb the rocks, when Nicola exclaimed ‘We’re getting near, I can feel it’. 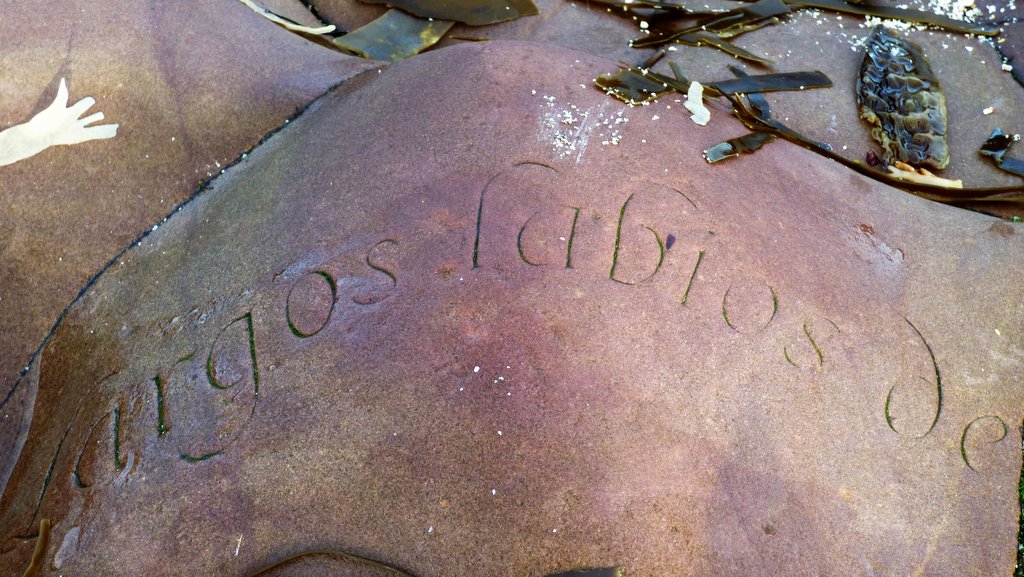 At that very moment her gloved hand was on the writing as she clambered over the rock.   And at the same time, some 20 mtrs away, her friend had found the flatter surface of the writings of the poem.   We certainly had a high five moment, and Bisto seemed to enjoy the commotion, darting in and out of the sea, as excited as we were! 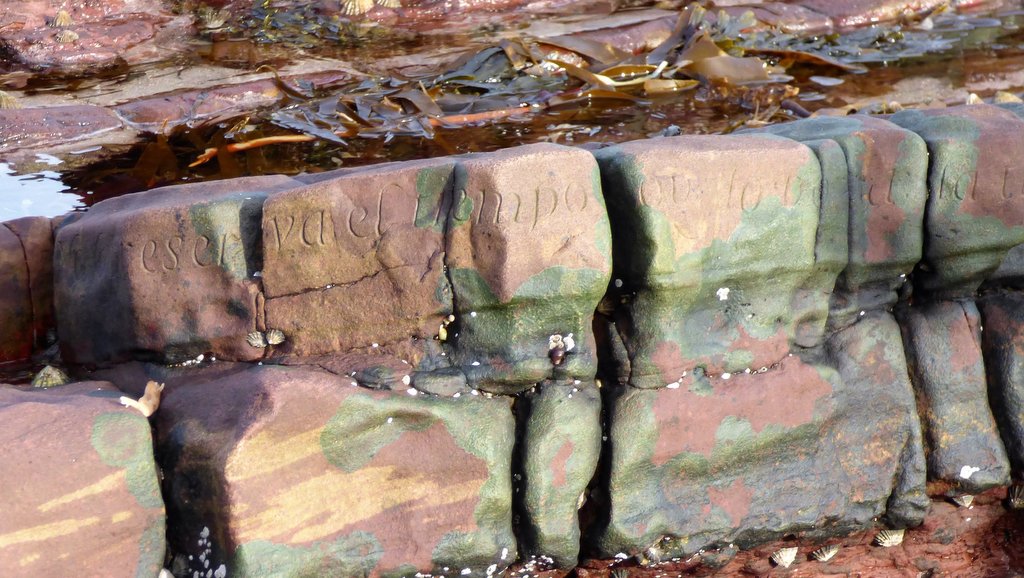 The mystery remains of who engraved the entire Pablo Neruda’s XVII Sonnet, a love poem written in Spanish and only visible for around an hour a day, before the lapping sea buries it deep within Caithness waters.

I do not love you as if you were salt-rose, or topaz,

or the arrow of carnations the fire shoots off.

I love you as certain dark things are to be loved,

in secret, between the shadow and the soul.

I love you as the plant that never blooms

but carries in itself the light of hidden flowers;

thanks to your love a certain solid fragrance,

risen from the earth, lives darkly in my body.

I love you without knowing how, or when, or from where.

I love you straightforwardly, without complexities or pride;

so I love you because I know no other way

than this: where I does not exist, nor you,

so close that your hand on my chest is my hand,

so close that your eyes close as I fall asleep. 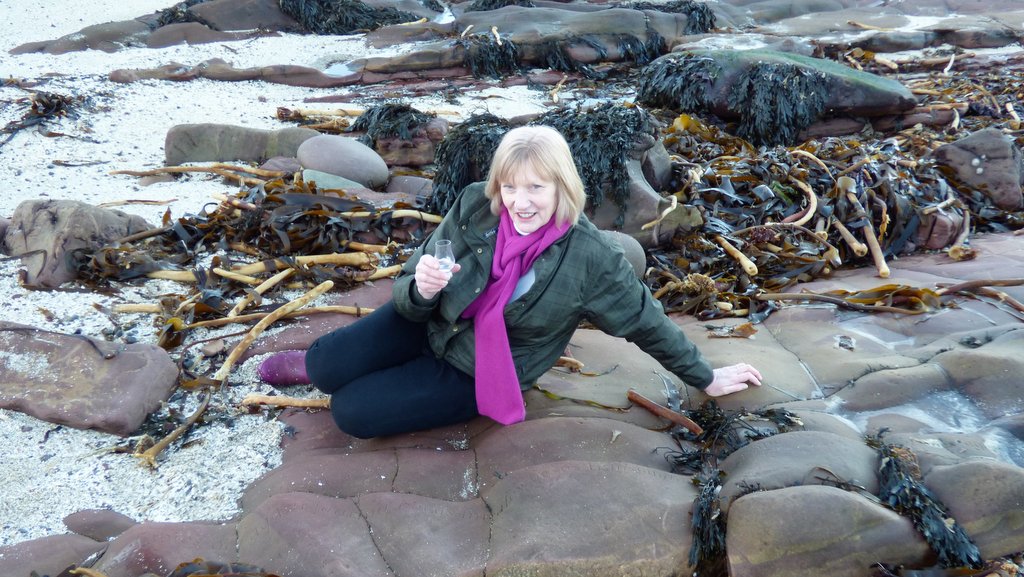 Thank you to Lynne Read at The Auld Post Office in Spittal near Caithness, pictured here next to a section of the poetry, having earned a well deserved G&T in her efforts to locate it.